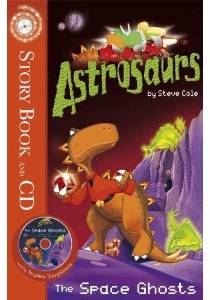 Anglické knihy pro děti. The sixth book in a brilliantly funny series starring the most intrepid dinosaurs you'll ever meet in space.

Captain Teggs is no ordinary dinosaur - he's an astrosaur! On the incredible spaceship DSS Sauropod, along with his faithful crew, Gypsy, Arx and Iggy, Teggs rights wrongs, fights evil and eats a lot of grass! The Sauropod crew are sent on a mission to a planet where a team of diplodocus are mining for a very valuable space mineral. But their work is being disrupted - by space ghosts! The mysterious spectres keep appearing and scaring their workers off. Are they the ghosts of a team of miners who disappeared fifty years ago? Teggs and his crew begin to investigate but then strange things begin ti happen to them too...

"I have 2 boys, 9 and 7, and I cannot praise Steve Cole's books enough. 'Space Ghosts' is just the next in the excellent 'Astrosaurs' series. My eldest son, not the biggest fan of fiction, has read all the books up to and beyond Space Ghosts. I have read the majority of the books to my youngest son who is the biggest fan in the house but he is also able to read the books, he can now read all the dinosaur names! The books give the boys the confidence to try some quite difficult words and pronounceations. The greatest feat Steve Cole has achieved is his ability to maintain the boys and my interest in what happens next. Proper Swashbuckling stuff. If you have kids, buy these books, you won't regret it."   By David Rich

"I read this to my son (10) in bed at night using our wind up torch (there's no light switch near his upper bunk bed). I have to admit it is a bit scarier than the rest of the series (up to book 8) but it is still a superb fun dinosaur sci-fi space romp for the over 5s. The only problem with this series (aimed squarely at pre-teen boys) is that Steve Cole can't write them quick enough. In this book Teggs and the DSS Sauropod crew fly to the mining Planet Creepus to investigate claims by the diplodoccus miners working there that they are being haunted. Highly recommended."  By Keith Joseph