Dinkin Dings and the Frightening Things 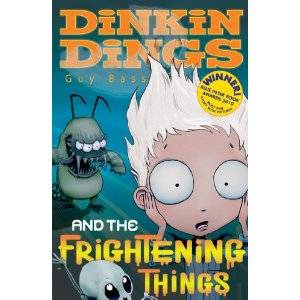 Anglické knihy pro děti. Známá série knížeček o chlapečkovi, co se pořád bojí. Ke čtení už pro trochu větší děti. Dinkin Dings is afraid of everything - not just scary things, like being stuck in a lift with a hungry jaguar, but pretty much totally everything (apart from the monsters under his bed)!When Dinkin sees his new neighbours, he's certain that the girl next door is in fact a flesh-eating alien space zombie! But no one believes him. Can Dinkin, and his friends, The Frightening Things, rid the world of the evil zombies before the whole planet is turned into mindless flesh-eating slaves...?

"I have an eight year old who can read really well but normally prefers to be read too and play computer games by herself. But she saw this book on Blue Peter (when it won "best book with pictures" and asked for it. I started reading it to her in the evening but she couldn't wait for me to read a bit at a time and took it off me and read it non-stop - on the bus to school, in the playground - anywhere! She's not a girly girl - she's like mysteries, aliens and monsters and this serves up all these with a heavy slice of humour, short chapters and lots of lists and crazy statistics. She's now asked me to order the next in the series..."  By Emma Cochrane

"A great book we read over a few evenings with our 6 year old. He laughed out loud on many occasions and we all enjoyed the humour and the comic suspense building up to its Dinkin denouement. We will be rushing to buy the other books in the series and hope there will be more to come."  By Elizabeth Mooney