Eat, Drink And Be Married (by Eve Makis) 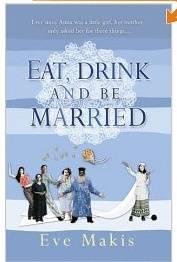 Knihy v angličtině. A blackly funny and heartwarming story about mothers and daughters, growing up and breaking free with a hint of magic and mouthwatering delicacies - Anita and Me meets East is East with a touch of My Big Fat Greek Wedding.

Anna’s head reels with plans to escape life behind the counter of the family chip shop on a run-down Nottingham council estate. Her mother Tina wants nothing but the best for her daughter: a lavish wedding and a fully furnished four-bedroom house with a BMW parked in the driveway. She thinks Anna should forget the silly notion of going to college and focus on finding a suitable husband. Mother and daughter are at loggerheads and neither will give way. Anna’s ally and mentor is her Grandmother Yiayia Annoulla. She tells Anna stories about the family’s turbulent past in Cyprus, the island home they were forced to abandon. Yiayia practises kitchen magic, predicts the future from coffee grains and fills the house with an abundance of Greek-Cypriot delicacies. Anna longs for the freedom enjoyed by her brother Andy but spends time appeasing her parents, dodging insults from drunken customers or going on ill-fated forays with her petulant cousin – the beautiful Athena. It is only when family fortunes begin to sour that Anna starts to take control of her own destiny… Wonderfully dark and funny, this is a bittersweet tale of mothers, daughters and being caught between two cultures.

"This was a nice easy read that I thoroughly enjoyed. It is the British answer to My Big Fat Greek Wedding. A genuine insight into the typical life of a 1st generation British born Cypriot girl. It can even double up as a Greek recipe book with each chapter begining with the ingredients and instructions for a popular Greek dish! The book is charming and witty and in places totally hilarious without the need to exagerate the characters and how it really is. I would definately read it again."