The Crucifix Killer (by Chris Carter) 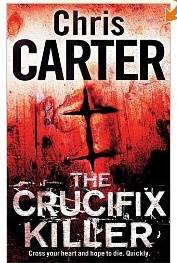 Knihy v angličtině. In a derelict cottage in L.A, a young woman is found savagely murdered. Naked, strung from two wooden posts, the skin has been ripped from her face - while she was still alive. On the nape of her neck is carved a strange double-cross: the signature of a psychopath known as the Crucifix Killer. But that's not possible. Because, two years ago, the Crucifix Killer was caught and executed. Could this be the work of a copycat? Or is Homicide Detective Robert Hunter forced to face the unthinkable? Is the real Crucifix Killer still out there, taunting Hunter with his inability to catch him? Robert Hunter and his rookie partner are about to enter a nightmare beyond imagining ...

"It's got to be a cop's worst nightmare. Just when he was finally starting to put behind him the long, harrowing investigation into a vicious serial killer that almost led him to breaking point two years before, Detective Robert Hunter is plunged once again into the nightmarish game of cat and mouse with a sadistic murderer that could cost him his sanity, his life or quite probably both. The original horrific killing spree of seemingly random victims, all linked by the trademark double-crucifix symbol carved onto the victims' bodies, finally ended when a man was caught, sentenced and executed. Despite the collective sigh of relief in the media and the community, Detective Hunter always secretly thought they had got the wrong man. Now, a new series of sadistic, horrifically theatrical murders are being discovered and, once the trademark double crucifix marking is uncovered, he knows he's up against the gruesome psycopath nicknamed The Crucifix Killer once again, this time with a brand new rookie partner in tow.

The book is sometimes vaguely reminiscent of the film "Seven", seemingly playing on the seven deadly sins theme. We have the overly vain woman who spends a fortune on miracle face creams skinned alive, and I'll let you guess which body part is chosen as a trophy for the married man who secretly attends "extreme sex" parties with his gay lovers ! But there are many red herrings and false trails so you won't work out who the real killer is until the very end.

I have a few very slight niggles. Firstly, some of the characters are a bit one-sided - you'll be hard-pressed to find a female character who isn't simply a prostitute or a wife figure, and the racial stereotypes seem a bit overdone too (do black people really call each other "Nigga" outside of films ?). I was also a bit disappointed that crucial information was withheld until the end, when Hunter finally pieces it all together - this meant that for the reader, it was impossible to pick up the clues along the way and "beat the detective".

Overall, it was still a great read. The murders are wonderful in their gruesomeness and theatricality and the killer is chillingly manipulative. This is the first in a series of novels depicting Detective Robert Hunter and I'll definitely be reading the sequel to see what happens to him next."
By Cheryl Pasquier